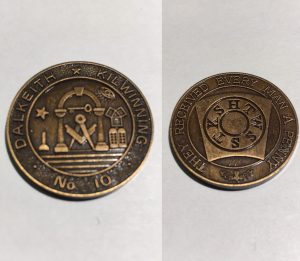 The Mark ‘degree’ is an important part of Scottish Freemasonry. Its Scottish history and origins are still being researched and in due time we are sure that the results will be shared.

The Unlawful Oaths Act 1797 and The Unlawful Societies Act 1799 were an attempt to suppress bodies that were thought to have been seditious and a danger to the British state. This was in the aftermath of the French Revolution, 1789, and was a reaction to the Spithead and Nore mutinies (1797). The acts were also aimed at clandestine political associations believed to have revolutionary motives.

The precise wording of the acts would have made Masonic Lodges illegal and would have legally have been forced to close. Interventions by the Grand Lodge of England and Scotland and Lodge Mother Kilwinning meant that Lodges would only be considered exempt from the acts if all Lodges were vouched for by a Grand Lodge. This had major consequences for Lodge Mother Kilwinning which is the subject of a separate discussion.

In order for the GLoS to decide what Lodges it would vouch for it required to know what all its Daughter Lodges were doing. To clarify what what Freemasonry was the GLoS declared, in 1800, that pure and ancient Freemasonry, known as St John’s Freemasonry, consisted of three degrees and three degrees only – Entered Apprentice, Fellow Craft and Master Mason. Lodge were directed to cease conferring any other ‘degrees’ including those of the Royal Arch and Knights Templar which GLoS declared to be ‘spurious and non-Masonic’ having been imported into Scotland by stealth and without the approval of GLoS. Failure to do so would mean the Lodge concerned would not be vouched for to the authorities.

However, the GLoS had overlooked the Mark and when this was raised on the floor of Grand Lodge and evidence produced to show that it had been conferred in Lodges, particularly operative Lodges, the GLoS relented and allowed Lodge to continue to confer the Mark. One problem remained. It had previously declared that there were only three degrees and to square the circle it decided that the Mark would henceforth be part of the Fellow Craft Degree but that it could only be conferred on Master Masons!

An integral part of that ceremony is the use of tokens (coins) and this has led most Scottish Lodges to have this ‘money’ specifically designed for use in each Lodge. This practice has now spread to England (where the Mark is separate from Craft Lodges) and even to Provincial Grand Lodges, Royal Arch Chapters and even Knight Templar Commanderies.

Many of these Mark Tokens are works of art in their own right and we are very proud of our own token at No. 10.

(reproduced with grateful thanks to the Grand Lodge of Scotland)