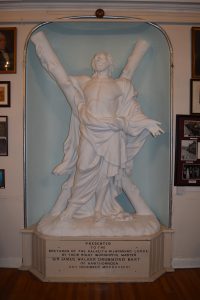 This very fine, larger than life size, wooden statue of St Andrew, signed and dated by Sir John Steele 1827, as referred to in the Royal Scottish Academy as a colossal statue in wood carved for the North British Fire R Life Insurance Corporate, stands in a niche specially prepared for it, in the Temple of Lodge Dalkeith Kilwinning No.10.

Sir John Steele who was born in Aberdeen on 18th September 1804 carved the statue. His family moved to Edinburgh about a year after his birth At the age of 14 years Steele was apprenticed to a wood carver. On completion of his apprenticeship Steele decided to become a sculptor and to this end he moved to Rome where he lived and studied for several years.

An article in the Edinburgh Literary Journal of 29th July 1829 states a large statue of St Andrew in wood and painted to resemble stone has recently been erected on the portico of the North British Fire and Life Insurance Company building in Princes Street at the foot of Hanover Street and which was burned down.

The statue was then thought to have perished in the fire.

And The Minutes of The Lodge, 2nd October 1848, R.W. Master then stated to the meeting that he had a statue of St Andrew the Titular Saint of Scotland, sculptured by Mr. Steele, Edinburgh and at present lying in his studio and that he intended to give the statue in a present to the Lodge if they thought it would be convenient to the Lodge Room and that he would send the Poor Blind Candidate to the door of the Lodge free of all expense the arrangement of getting the statue fitted up in the room etc. to be left to the Committee.

The Lodge Room was tastefully fitted up with evergreens and the Lasswade Factory Instrumental Band played several airs suited to the occasion when the Brethren were all seated the R.W. Master rose and stated that he had called the Lodge together for the purpose of presenting them with the statue of St Andrew the Tatuler Saint of Scotland which was now placed upon its pedestal in the Lodge Room and which he now presented to the Lodge as a token of his esteem and regard and after a neat address sat down amidst plaudits of the Brethren and where the statue stands to this day.

In the past 20 years or thereabouts the National Museum of Scotland and The Royal Scottish Academy have showed great interest in the statue and have concurred that the Blind Candidate of Lodge Dalkeith Kilwinning No. 10 is indeed the statue that was thought to have perished in the fire in the middle of the 1800’s.