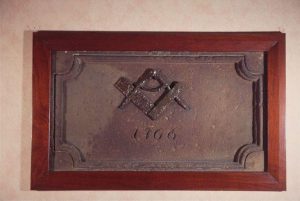 The Lodge was erected in 1766, but it was on the anniversary of St. John, the Evangelist, 27th December 1764, that the Members took the first steps to build the present Lodge Rooms.

Brother Hugh Maxwell had been re-elected to the Masters Chair and as several of the Brethren had signified their intention to him of building a Lodge, a committee of the Office-Bearers, along with several members and “any of the other Brethren who think fit to attend”, was appointed to meet at Mrs Dickson’s house on the 4th January 1765 where after clearing the former and present Treasurers, accounts, they were to “concert measures about inspecting the areas in and about Dalkeith proper for the building on.”

Several meetings were held and it was found that the opinions of the members varied very much on the suitability of different areas, but at last, on the 31st may 1765 , the Committee decided upon a garden adjoining “the North or East End of Mr. Barclay’s new School belonging to one, William Hardy, portioner in Dalkeith”. Mr. Hardy attended this meeting and consented to give from his garden an area of 50 feet in length by 25 feet in breadth, walls inclusive , for an annual Feu-Duty of 12s 6d. The Lodge was to be only one storey high, and there were other conditions about the garden and lights. In addition, the Masons had to build a new door to the garden between the gable end of the lodge and that of the School. This is exactly as it stands at the present day.

By the 11th February 1766, the building of the Lodge had commenced. Brothers Currie, Scott and Young, who were to carry on the work, were asked to agree amongst themselves whether it should be done jointly or divided into equal shares and, as the Minute quaintly states, “hoping as Brothers they will be influenced by no mercenary, but make the interest of the Society their sole motive”. Brother Scott reported to the next meeting that, after consultation with his fellow workers, they had decided to carry on in concert, “and were resolved to execute the said work amicably to show they were Masons indeed, not only by their mutually assisting one another, but by making the welfare and good of Society in general their sole aim in this as well as in every undertaking that concerns the said community”. These sentiments fitly epitomise and embrace the fundamental principles of Freemasonry.

Although the building was finished that year, the consecration did not take place until the 24th August 1767, the ceremony being performed with the usual rites by Brother Richard Tod, Substitute Grand Master of Scotland.

The old Lodge Room has well and truly served its day and generation. During the Centuries of its existence many eminent townspeople have taken part in our ceremonies and many distinguished visitors have been entertained within it walls.